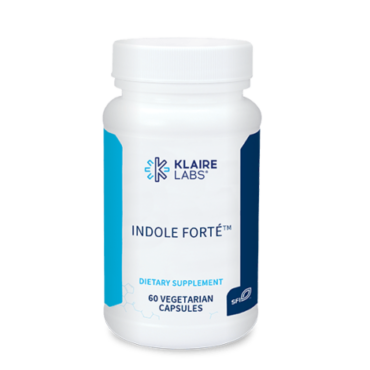 Dietary indole compounds found in broccoli, cabbage, and other cruciferous vegetables exert a strong protective effect on tissues such as breast, cervix, and prostate that are most susceptible to the effects of undesirable estrogen metabolites, such as 16-alpha hydroxy-estrone. Indole compounds favorably influence steroid hormone metabolism and help rebalance estrogen in favor of 2-hydroxyestrone, a protective estrogen metabolite. Dietary indoles also stimulate liver detoxification enzymes, inhibit DNA damage, and regulate cell cycle progression. Indole-3-carbinol (I3C), the most prominent dietary indole, readily breaks down in the presence of stomach acid into diindolylmethane (DIM) and other associated indole compounds that are subsequently absorbed. Although diindolylmethane has been claimed to be the preferred form for dietary supplementation, we find the available published evidence does not adequately support this conclusion. The bulk of scientific data reports benefits from taking I3C. Data in direct support of taking DIM alone is suggestive but still inconclusive. Rather, it appears that the total content of dietary indoles is most relevant. Indole Forté™ contains I3C, DIM, and other indoles for more complete protection. Increased indole intake may be especially important for women or men with estrogen-dominant health conditions.