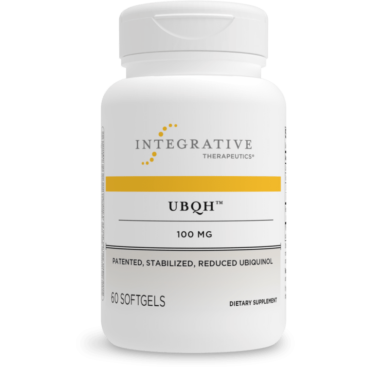 Integrative Therapeutics’ UBQH 100 mg delivers ubiquinol‚ which is the most active form of CoQ10. In this fully reduced state‚ ubiquinol has antioxidant properties; in other words‚ it effectively frees electrons. Unfortunately‚ ubiquinol is extremely unstable and reverts to CoQ10 with exposure to either oxygen or light. Extensive research has been done to find a way to stabilize ubiquinol and put it in a unique‚ convenient supplement. UBQH features Kaneka QH‚ the stabilized version of ubiquinol that clinical studies have shown has a higher degree of bioactivity than CoQ10—meaning that it gets to work in your body faster. The use of supplements such as UBQH 100 mg Softgels by Integrative Therapeutics has been shown to boost energy and stamina five times over baseline levels‚ as well as enhance the metabolism of glucose in animals.

This supplement contains an exclusive ubiquinol formula that was developed with a focus on people whose DNA is unable to appropriately process CoQ10‚ or who are experiencing the normal decline in CoQ10 production associated with the aging process.

The clear health benefits of UBQH include: